Our many thanks to Jennifer Hullick (Editorial) and Simon Cross (Photographer) from The Advertiser's SA WEEKEND for sharing our wonderful story on Saturday 30 January.

We'd hate you to have missed out on the read:-

Can a Replica American schooner put a struggling KI town back on course?

The phrase “tell him he’s dreaming” might have been coined for Tony Klieve. At the age of 82, he is leading an intrepid band of retirees on a mission few thought achievable and many have laughed at openly.
His goal? To build a full-size, seagoing replica of the first sailing vessel ever constructed in South Australia and take tourists on local cruises, thereby reviving the ailing economic fortunes of his Kangaroo Island town.

Now, despite the sniggers and doubt, Klieve and his crew are close to having the last laugh, as the project to rebuild the schooner Independence turns towards the finish line. “I wanted to start the project off about 15 years ago,” he says. “I got a bit of interest in it but then it all fell over. About five years ago I went to the Progress (Association) and said ‘we’ve got to do something’ because the gypsum mine had finished at American River a few years ago and the town was slowly going backwards.

“I said why don’t we rebuild the Independence?”

Klieve heard about the history of the schooner soon after migrating to Kangaroo Island in the early 1960s to pursue his trade as a builder/carpenter.

American sealers under the command of Isaac Pendleton had sailed from Stonington, Connecticut, in the brig Union, meeting French explorer Nicolas Baudin in waters off WA in 1803. Baudin, who had been mapping Australia’s southern coast, had noted seals aplenty on the island and shared his charts with Pendleton for his crew’s onward journey to Kangaroo Island.

Independence project planner and volunteer David Churchill, 78, has learned the schooner’s history by heart. “Baudin gave him a copy of his charts and they came down here and that’s where American River got its name,” Churchill says.

The poor manoeuvrability of the 100-ton Union meant another, smaller vessel was needed to work the local bays. “They came here and built the boat in the winter of 1803,” Churchill says. “They built it in five months, which indicated they had the equivalent of an Ikea kit on board.”

It was not uncommon for expeditions of this nature to carry the frame for a smaller vessel aboard to be used with the addition of local timber.

It would be another 33 years before South Australia became a British colony and other seagoing vessels were crafted by shipwrights from local wood – making Independence the first of its kind to be built here in SA. The vessel and larger brig filled their holds with seal skins and sailed for Sydney in mid-1804. Few other details are known, except that in 1805 the schooner was lost in waters off the Antipodes Island Group, southeast of New Zealand.

Now, 216 years later, the Independence is again taking shape on the shores of American River and the men involved have had to use as much craftsmanship and ingenuity as the crew of the Union to get it done.

In 2005, Klieve spread the word looking for the original plans for the boat. A librarian friend in Adelaide tracked down some likely documents put together by marine historian Robert Sexton in the 1970s, during his time at the SA Maritime Museum.

Churchill says Sexton took an interest in the Independence and liaised with the Mystic Seaport Museum in the US, not far from the home port of Captain Pendleton and his crew. Luckily, east coast pilot schooners, as they were known, were common cargo-carrying vessels in the 1800s. Such schooners were quite fast, particularly across the wind, and were used in the first America’s Cup races.

“Between them they came up with a set of plans,” Churchill says. “There were no specific plans for the (original) Independence … but (Sexton’s) plans showed as near as what the Americans thought it would have looked like.”

Klieve tracked down Sexton in Adelaide who agreed the group could use the plans to build their reproduction.

They also bought generic plans from boat specialists Parker Marine in the US.

“We thought we’d better make sure we are on the right track, so we asked if they had any plans for a topsail schooner, 45ft long, that weighed 35 tons, built in the 1800s,” Klieve says.

“We bought a set of plans off them – they were almost identical to what we had. That was basically the start of it.”

But the group also needed a place to base the build and so began years of wrangling to lease waterfront land from the state government at American River’s wharf. The shed came next, built by the handy folk of the newly formed “Rebuild the Independence Group” and a council infrastructure grant. An independently operated cafe on the side of the boatshed was also built to help pay for the project.

Churchill says he spent much of this period awash in paperwork trying to prove the business case for the project and working out ways to keep the funds coming in.

“I figured it could be built and run at least at break even when it was in the water,” he says.

Donations of materials and tools began coming in – one wall of the shed is now festooned with the tools of master woodworker Ian Peachey who died in 2016 and wanted the boatmakers to have them before his death.

“Then we were offered a piece of wood 55 feet long and a couple of feet square, Sydney blue gum and suitable for a keel,” Churchill says. The Schooner Enterprize Trust in Melbourne donated spare wood from its project and its transport was paid for by Bay of Shoals winery with help from SeaLink ferries.

Other businesses came to the party, helping source hard-to-find materials as the South Australian community rallied around the project. Generous discounting on prices also helped.

“We’ve been lucky – we’ve had no government funding at all for the project – we’ve done it all through donations and voluntary labour,” Klieve says. Much of that work has been by volunteer Bob Imeson, 75, a retired boat builder. It is his responsibility to act as shipwright for the project.

“I’m the person who’s supposed to keep it on track as far as quality assurance is concerned,” he says. “We are building it under a Lloyd’s survey, the strictest survey you can build any vessel under. We need to do that because it’s a passenger-carrying vessel. The survey has strict requirements and we can’t deviate from those one little bit.”

Imeson moved to American River from Adelaide seven or eight years ago after visiting on a sailing trip and came on board with the project.

“I think it was rather a fit of madness – I got cajoled into it I suppose,” he says. “Most of us involved in the Independence project are sailors so you’ve got to be a bit crazy.

“Everyone said it couldn’t be done but it could, and for not a lot of money. Everyone had estimates of millions of dollars. That would never happen so we had to do it the hard way. Nobody else in the group had built a boat, so I was elected.”

Boat building commenced in earnest in 2014 and has now reached a major milestone. The keel and “ribs” of the vessel are in place with the transom or stern of the boat close to completion and soon to be attached.

“It has gone beyond no return,” Imeson says. “The frames are up and the planking is about to start and that will be a turning point.

“But the hardest work is done, making the hardwood frames and making them all perfect. A lot of work has gone into them.”

The wood for the planking is already in the boat shed and the volunteers are champing at the bit to get to it.

“There are three types of Oregon pine for three different layers of timber on the vessel, one on top of the other. It will be enormously strong,” Imeson says.

“We’ve got a diesel engine and a chap who’s going to make up our propeller shafts at no cost. The only major thing we haven’t got is the sails.” Churchill agrees much of the hard work is done: “Once it’s planked and it’s inverted the right way, then it’s a bit easier.”

Among the leadership team, no one is yet game enough to predict a solid end date for the project, which may still be a few years away. Their optimism has often been repaid with unforeseen delays and revisions to ensure the final vessel is strong, seaworthy and able to carry 20 paying passengers around the sheltered waters of the inlet.

Churchill’s original estimate for the cost of the project was $300,000 but it would have been twice that without the group’s free labour and Imeson’s volunteer work as shipwright. Donated material also has saved the group $50,000, as have discounts from supportive companies.

The group’s successful fundraising efforts, including the “buy a plank for $20” initiative has kept the books in the black as work ticks along. But, as each year passes, the age of the volunteers weighs more heavily on their minds.

“We are probably motivated more by the sense that we’ve got to get on with it because of our age,” Imeson says.

Klieve adds: “I want to see it in the water because we’re all getting older. I really want (to get) the school kids interested in it. If they can work on it, they can become part of building it and that’s the next generation.”

Another aspect of Independence history is being played out on the project’s doorstep. The best guess about the building place of the original schooner has, to date, been a place called Independence Point, further south of the town’s wharf.

But most of the sailors in the project group say there is no way the Union could have berthed in such shallow waters.

“There’s no way the Union would have sailed up there – it would still be there if it had,” Klieve says.

Now science may be on their side. Archaeological investigations by staff and students from Flinders University are in the process of uncovering what could be the original logs and iron wedges used as the platform and launch cradle for the 1803 vessel, near the town’s wharf – about 3km north of Independence Point.

Dr Wendy Van Duivenvoorde, an associate professor in maritime archaeology at Flinders, says more figurative and literal digging is needed before any conclusions are made. In the meantime, tourists come to the boatshed by the water and listen to tales of the sea and the adventures of a group of mates who have refused to give up on their passion project.

That dream remains well and truly alive, as members conjure a time when visitors will be able to set sail aboard the new Independence.

“As a drawcard and tourist attraction for the island, it’ll be really significant because it will be an authentic looking, early 19th century vessel,” Imeson says. “I’m sure people will flock to see it. There’ve been lots of naysayers (but) I don’t think there’s any doubt the boat will be built.”

Klieve has the last word: “I think this project has really brought the community together. We had a few disagreements in the early stages but they’ve all come round.

“It’s brought a lot of people into the place – I think we’ve really helped save the town.”

Visitors to the project or its website, rebuildindependence.org, can buy a plank of the new Independence for $20, with all proceeds going towards the build. 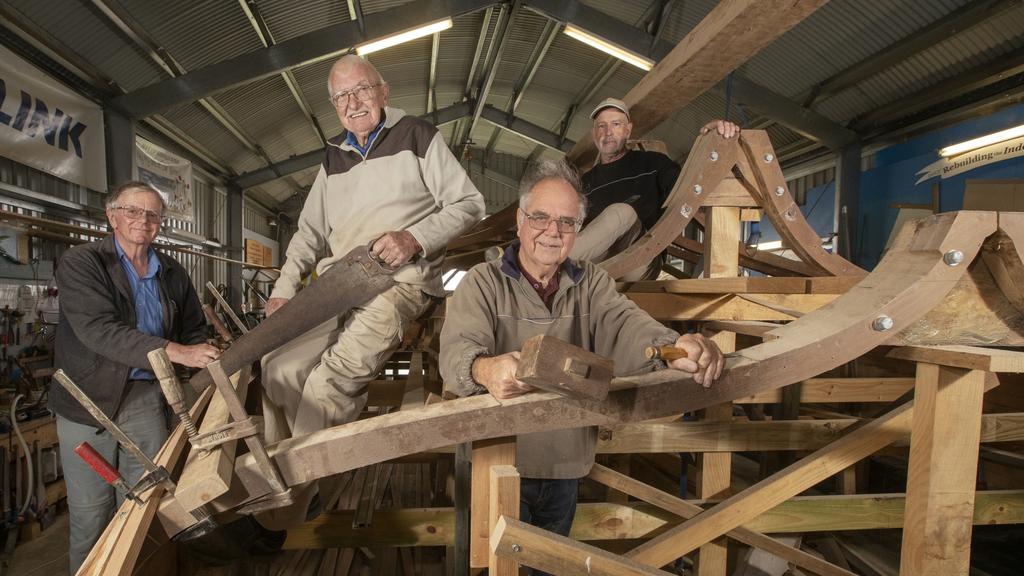 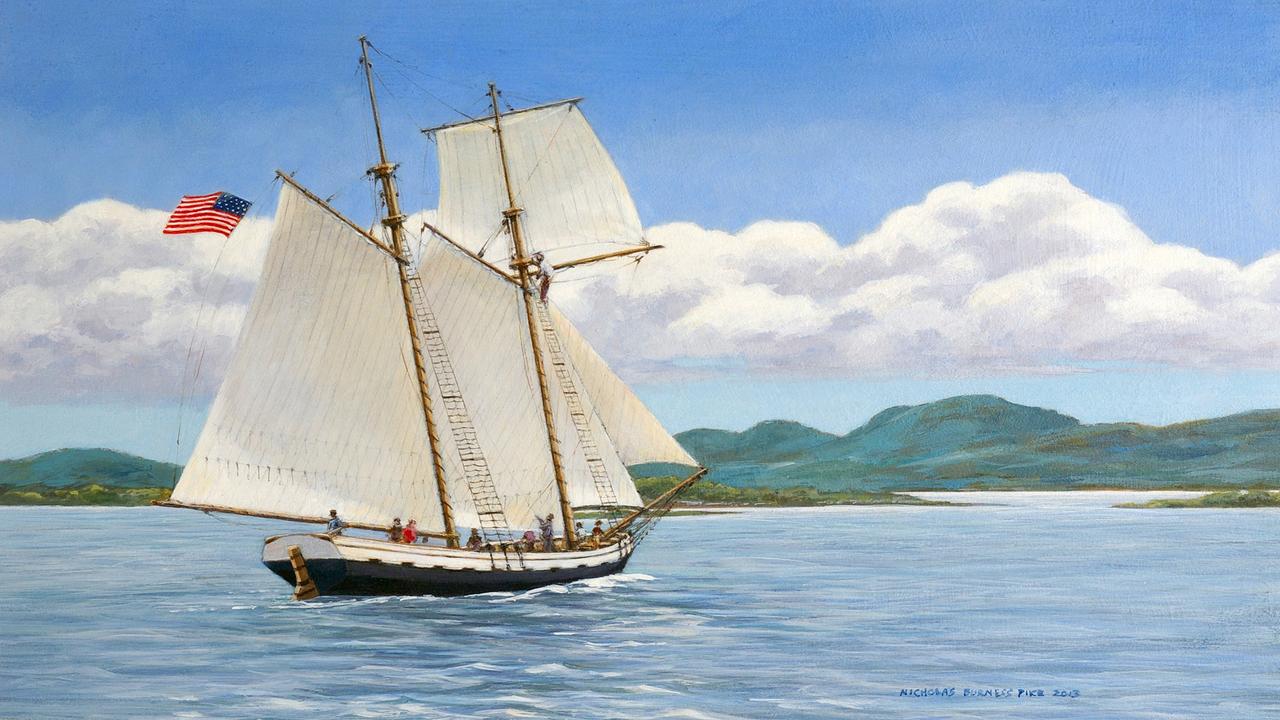 Painting of The Independence. Picture supplied by Nicholas Pike 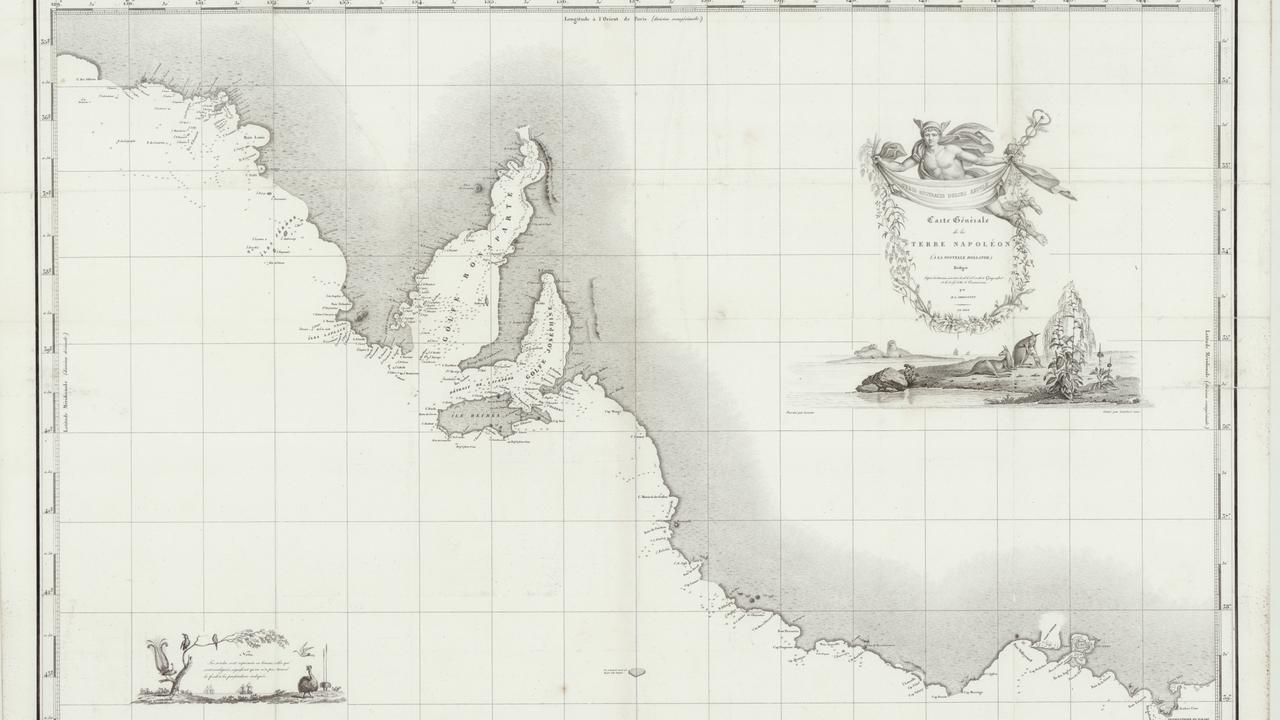 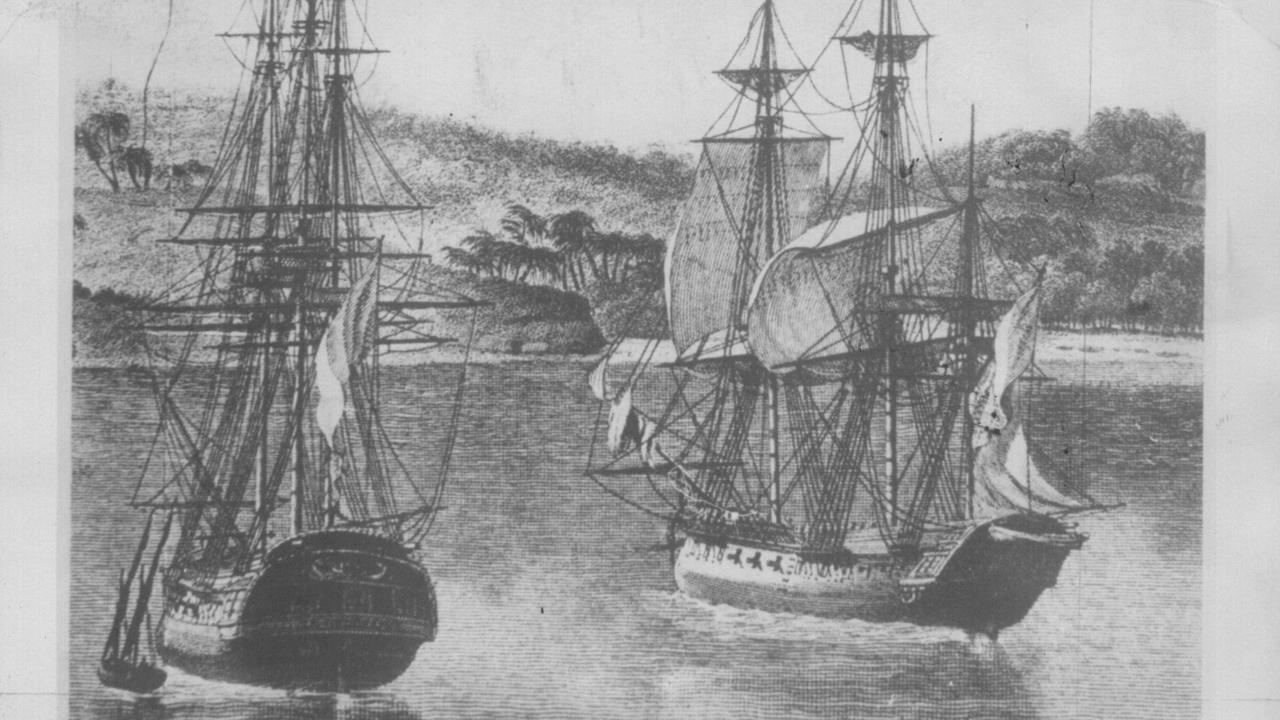 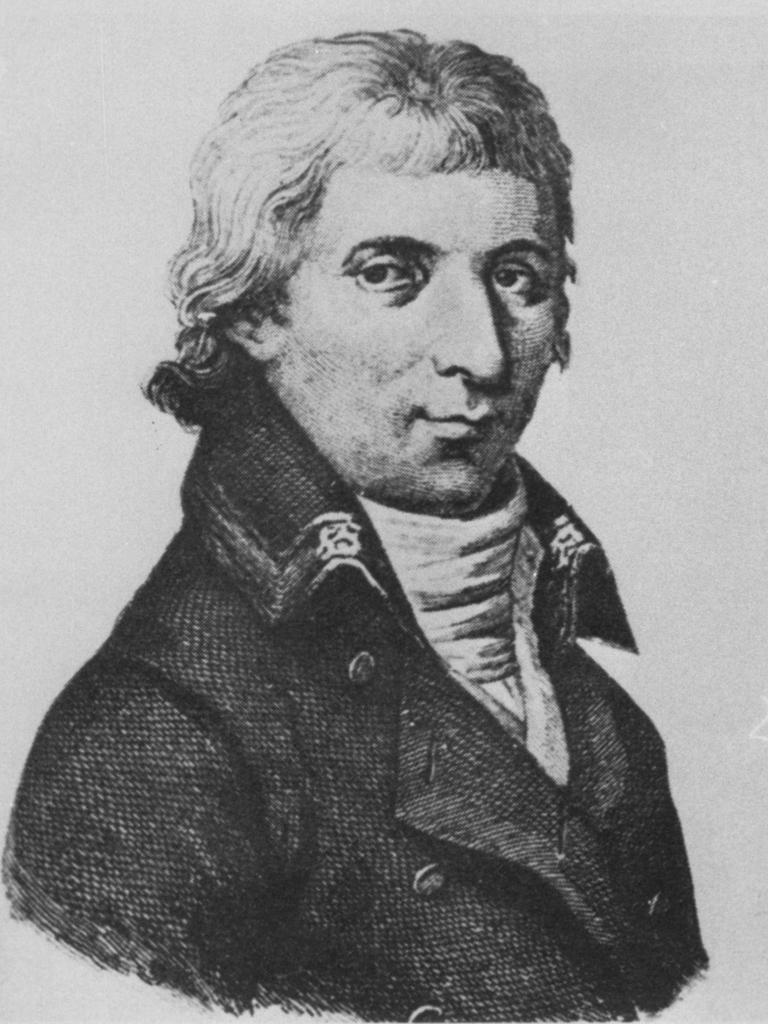